​Domestically, America is a nation of sheep and for any who resist ─ atheists, Muslims, occupiers, libertarians, and the rest, the final solution, the solution urged by patriotic Americans, is extermination. But twenty-first century corporate America, feigning adherence to its original constitution of 1787, and dedicated to capitalist profit above all else, has instead instituted a network of lucrative penal camps.

The recalcitrant will spend the rest of their lives in the camps, work camps for those who can afford the corporate-imposed monthly stipend, less-comfortable accommodations for the indigent, including those whose money has run out and who can no longer afford the stipend.

The system is unchallenged, until a chubby black man arrives saying he’s Jesus Christ come down to establish his kingdom. Right-wing America, this Jesus says, is the prophesied world of the Antichrist, and is this Jesus really who he says he is or is he the Antichrist, or is he nothing more than a whack-job? And how will America respond to his assertions of divinity and his promise of redemption?

The Jesus-fronted, right-wing revolution that successfully toppled American democracy didn’t get started as a vast,right-wing conspiracy, and had only morphed into it, once the demagogues grasped the possibilities inherent in harnessing and directing the wrath of a disgruntled American populace. The demagogues insinuated themselves into all the different levels of government and society, and once ensconced, they watched for the most propitious moment, and struck ruthlessly when the moment arrived.

The result is a new America of Christian fascism where all dissent is ruthlessly suppressed, the ruthlessness symbolized by an iconic video gone viral – Christian hymns blasting out of speakers as mounted American police charge like Cossacks into a crowd of left-wing protestors, a scene of shrieking panic and bloody mayhem.

Most of America remains oblivious.

The only serious opposition to the original coup had come from the Hawthorne Group, a cadre of prescient young leftists-techies. The group had fought a valiant, clandestine battle against the surging right wingers, and despite their limited resources and the strength of the opposition, the Hawthorne Group came astonishingly close to derailing the revolution. The group ultimately failed, spectacularly, its members executed on TV or fleeing into exile.

A decade later, and the glorious revolution has floundered. POG, the Party of God, the old Republican Party, finds itself stifled by its own successes. Having risen to dominance on contradictory promises ─ to eviscerate the federal government while restoring America to its position of world dominance, POG’s dedication to states-rights and to decentralization has stifled its international ambitions. The American president, a closet pragmatist frustrated by the contradictions inherent in the promises, is intent on taking America from faux democracy into a brazen dictatorship that will sweep aside the myriad centers of power and unleash America’s military and economic strength to conquer the world. Another POG faction, the Zealots, is pushing for a nuclear holocaust, to prompt the Lord Jesus to come back. The success of one side or the other seems assured, until two members of the long-defunct Hawthorne Group step up, one because he’s being manipulated by an old POG nemesis who still has a need for revenge, the other because he’s egomaniacal enough to believe he can, against all odds, save America and restore the original republic.

On August 28, 2020, Americans will go to the polls, whether they want to or not, and will decide, in an up or down vote, the future of the country. A yes vote will put an end to the democratic experiment by cementing the ascension of Dear Leader. With four chaotic years of the Leader and with all of the groundwork laid down by the Nationalists prior to his emergence, the brainwashing, the coercion, the purging, he's no evil genius brilliantly masterminding a coup. He’s a man who, fortuitously for him and his family, stumbled onto the national stage at the most propitious moment.

In mid-August, to energize the nation for the big day, America will celebrate Plebiscite Weekend, the new Fourth of July, the kickoff to the two-week blitz leading up to Plebiscite Day. There'll be parades, fireworks, hot dogs and … book burnings. The grandest ceremony will be in Washington, D.C., a million zealots cheering as a million books burn. Government men and women (mostly men) will be dispatched across America, to preside over all the local book burnings. One of the Leader's most trusted men, Vic Chesney, aka the Liquidator, is sent to the insignificant hamlet of Snyderville, where his sojourn will provide a microcosm of a democratic republic descending into totalitarian hell. 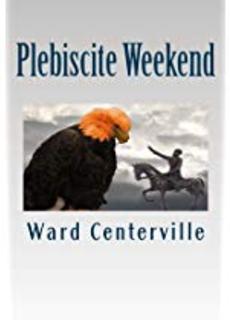