A Different Yankee – Red Sox Rivalry, Boston's Impossible Dream, The View From The Other Side.

Fifty years ago, the Boston Red Sox stunned baseball, winning the American League pennant. We asked our friend Mike Gordon to reach back into his fifty-plus years as a fan and give us a blast from the past.
​

This is what he gave us:

Lake Champlain isn’t a Great Lake, just a great lake. It’s more than a hundred miles long. Most of the lake is in the U.S., the upper piece is in Canada. A lesser border, a vertical line running up the middle of the lake, separates northern New York from New England, Yankee territory from Red Sox territory. There’s some spillover, with fans of both teams on the wrong side of the lake, and it’s the spillover that caused me so much grief as a kid growing up there in the middle sixties.

Back then, for the boys, it was all about baseball. Football was rapidly emerging as America’s obsession, but hadn’t fully arrived; basketball was just something to help get us through the cold northern winters, and hockey? Hockey was, and is, something of a stepchild. Not only were we situated right there below Quebec, but just on the other side was Montreal, home of the Canadians, hockey’s Yankees, hockey’s Celtics, and we were oblivious. There was a Wednesday night hockey game on TV but come Wednesday night, you were more likely to find us watching The Beverly Hillbillies, Green Acres, or Lost in Space. Hockey was still Canada’s game, not ours. Up to and through most of the 60s, the NHL had just six teams (unbelievable, huh?) Only two of those teams were in Canada but those two teams had a lock on Lord Stanley’s cup and there were just a handful of American players in the league.

Even in the winter and with the snow piled so high you had to stand in the road and stop traffic so your dad could back the car out of the driveway, it was about baseball and the American League. We had the Sporting News and Baseball Digest to keep us warm, and the National League? Well, we had Giants' fans and Dodgers' fans but they were adult dinosaurs on the road to extinction. They were bitter and torn – how could you not remain loyal to teams that had provided so many thrills? Or remain loyal to teams that absconded to the Left Coast? The sons of those National League fans were National Leaguers too. In those days, a kid became a fan of his dad’s team, and league. It was tough times for National League kids. Unlike their dads, the kids didn’t have the lifetime of memories that could sustain adherence to a ball club three thousand miles away. Those teams were rarely on TV or the radio and even if they were, their day games started at 4 P.M., EST, when all the kids were outside playing, and the night games didn’t start until 11 P.M. Most days you didn’t even know how they did yesterday until the kid came along on his bicycle with the afternoon paper.

Back then, along the lake, it was mostly Yankees and Red Sox, and there was a rivalry, a different kind of rivalry than the hyped-up deal of today. The Yankees had the heels of their spikes on the Red Sox’ neck and would keep it there forever, or so it seemed. The Yankees owned the American League through the first half of the 60s and the Red Sox weren’t very good. They could hit, especially in their own ballpark, but everybody else could hit there too, and the Red Sox couldn’t play defense and they couldn’t pitch. The Yanks won five pennants from 60 to 64 while the Bosox never finished higher than sixth, and their sixth place finish came in an expansion year. Yes, baseball rolled merrily along in the 60s, and in 1961, and in our arrogance, and with the M and M boys chasing the Babe, we hardly noticed the rookie Boston brought up, except he had a name so convoluted, they had to shorten it for the box scores – Yaz. He seemed ordinary, with his paltry eleven homers and his .260 batting average. Or the rookie in 62, Conigliaro, or the shortstop in 63, or Mr. James R. Lonborg in 65.

The Yankee dynasty ended with a thud in 1965. Seven and 7 at the beginning of May and we weren’t worried. Nineteen and 27 on June first and we were concerned. Thirty-eight and 39 on July third, a game under .500, and we were hopeful. It was unbelievable to think it would take the Yankees until the Fourth of July to get to .500 but at least we’d get there and once we did, we’d take off like a rocket to the top of the standings, the first team to win six consecutive pennants. Except we lost the Fourth of July game to the Red Sox, and we spent the next two and a half months struggling to get up over .500, Sisyphus, and although we eventually got to two games over .500 (twice,) we quickly dropped back under and with a seven-game losing streak the last week of September ensuring we finished with more losses than wins.

The Twins won the American League pennant in 65 and by a comfortable margin over the Orioles and White Sox, and one of those old Twins said, years later, how it was the O’s and Chisox chasing them but when they looked back over their shoulders, it was the Yankees they were watching, warily. When would the Bombers make their move? Turned out they didn’t, and it turned out 65 was no fluke.

In 1965, as unthinkable as it was to finish fifth, we at least finished ahead of Boston; they finished ninth, but 66 was calamitous. We finished in last place, a half-game behind the Red Sox. That’s right. The New York Yankees of Mantle and Ford finished last in the American League and we could argue all we wanted how, with three of our rainouts not getting played, we didn’t technically finish behind Boston. If only they’d let us play those games!

Some nerdy kid who didn’t know spit about ball but who was good at math did an analysis and his conclusion? The Yanks would have had to win all three of those games to finish ahead of Boston, and given the Yanks’ winning percentage and the percentages of the teams we didn’t get to play and some other esoteric math-stuff, the odds of us finishing ahead of Boston, well, I don’t remember the odds, exactly, but they were daunting and sent those Red Sox kids into howls of laughter.

Couldn’t get any worse, right? Try 67. We moved up one position to ninth, but what happened in 67, and I’m not making this up, the Boston Red Sox won the pennant. That’s right. They jumped from ninth to first, capturing the American League flag. It was a four-team race and ninety-two wins usually wasn’t enough to win but we couldn’t kid ourselves. The 67 Red Sox were a pretty good ball club.

For us Yankee kids, it was a summer of agony. It was the world turned upside down. It was a crazy pennant race with the Yankees no longer able to keep order and we watched with incredulity as the top of the AL standings got reshuffled every night. Incredulity, and annoyance, too – all those Red Sox kids (some newly-minted) in the sandlots with the bat twisted way back up and around and behind their heads. And sadness too. At the beginning of August, the Yankees traded Elston Howard. Venerable, gentlemanly, proud, iconic Elston, the first black Yankee, shuffled off to where else – Boston. We were heartbroken. It made sense, the Yanks weren’t going anywhere and would get a couple of prospects who might help them down the line (they didn’t,) and the Sox got a veteran who knew all about September pennant races and World Series. Around the middle of August, the TV station just across the lake, that’s New England, remember, began broadcasting Red Sox games. It was something entirely new to us in the hinterlands, ballgames two or three nights a week instead of just the once-a-week, Saturday afternoon game (when we were busy playing our own games.) Sulking Yankee fans could still enjoy a pennant race, it just seemed weird, rooting for Minnesota and Detroit and Chicago, anybody but Boston, and where were our Yankees? Buried in obscurity.

Summer ended, school started, and maybe we could avoid those mouthy Bosox kids over the summer but there was no getting away from them in school. Didn’t they ever talk about anything else? Well, we sniffed, it’s all new to them, and while they crowed, we rooted, and prayed, in vain. The Red Sox won the pennant with a dramatic, come-from-behind victory on the last day of the season.

It was a lousy World Series. For baseball fans and for baseball history, it was a classic, but for us, in those days, leagues mattered, and you always rooted for your league and so there we sat on those October afternoons, morosely rooting for the Red Sox against the Cardinals, and I suppose we were conflicted. Sure, Boston represented our league and we couldn’t break the loyalty, but did we really want them to win?

No fear, they were the Red Sox, and fell in seven games to the Cardinals.

We couldn’t help smiling, and with the Red Sox rejuvenated, we looked around for another patsy and didn’t have to look far – the other New York team, those Mets. We’d always ignored them, they were National Leaguers and woeful, but what we found, we could despise the Mets with an intensity that matched our feelings for the Bosox, and we’d never have to worry about the Mets doing to us what the Red Sox did – getting good. No. We’d always have the Mets to kick around. The Mets had the temerity to rise up out of last place in 66 and the good sense to fall back to their cellar-dwellings in 67, and the Mets fans, and there weren’t so many of them, could rave all they wanted about their rookie pitching sensation. The guy was phenomenal but just because the Mets finally had a pitcher and the Red Sox had lived the Impossible Dream, what did those Mets fans think they were going to do, pull off their own miracle? 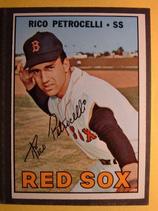 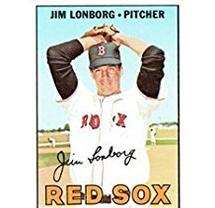 The world turned upside down; the American League standings too. 1967, the year of the Red Sox Impossible Dream. New England was ecstatic, but from where this kid watched, just across the lake, in upstate New York, it was agony and sour grapes. 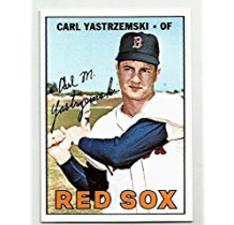